Smart grids are complex socio-technical systems that provide solutions to issues of aging grid infrastructure, increasing need of demand response and aid in the reduction of carbon emissions. Different component technologies, customer behavior and controls in power networks interact in a highly dynamic manner in today’s smart grids [1]. Yet most research on smart grids tend to be domain specific in their simulation and assumptions; thereby being only partly successful in analyzing the complexity of the active grid.

A perspective on analyzing socio-technical systems was proposed by Ostrom [2] which states that “Considerable theoretical and empirical research suggests that adaptive management of socio-technical systems require networks that combine dense local information flows with effective connections across groups and scales to foster the combination of local knowledge, cross scale coordination, and social learning.” This lends a view that complex socio-technical systems should be considered as multi-layered dynamical systems that comprise intra- and inter-layer interactions of very diverse components with local sub-objectives. This view can be applied to smart grids through the Smart Grid Architecture Model (SGAM) [3]. SGAM with different interoperability layers, domains and zones. 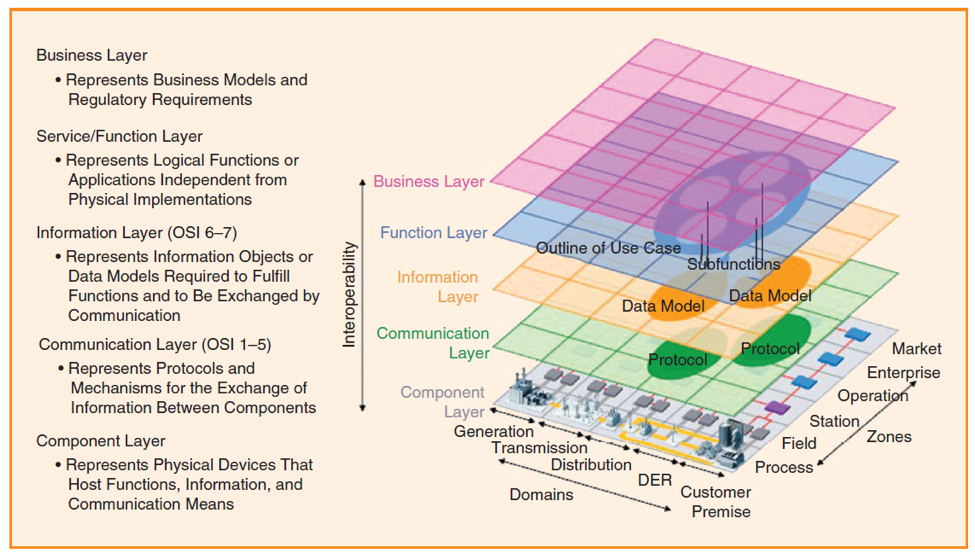 Technological advancements in the field of ICT, power electronics and hard-ware in the loop simulations, enable the behavior of individual subsystems together with their interactions with each other to be captured and analyzed through sophisticated simulation platforms. These platforms, that enable simulation of multiple sub-systems across disciplines and domains extend a multi-perspective view of system interaction and are termed as co-simulation systems.

In this blog, we aim to provide a brief overview of co-simulation efforts that have been undertaken, highlight an example of such a work, present a proposal for implementing co-simulation at the distribution grid to capture interaction between the business/market layer of the SGAM model and its physical grid layer. We conclude this article by providing insight into current barriers to co-simulation and the future of such a modelling approach.

Co-simulation in the field of smart grids serves as an integrated platform for capturing and analyzing not only the interactions between different components but also decisions of stakeholders and their control actions. For implementing a co-simulation platform, it is important to connect individual systems together. As identified in one of the early works on co-simulation by [4], it is challenging to model hybrid system environments that combine continuous-time based physical models and discrete events based control models. To address this issue, the work of [1], aims at demonstrating how complex problems in smart grids can be modelled and decomposed into separated subsystems, that can be simulated on open source platforms. This work generates critical insights on how a cyber physical system prototype can be built and which aspects of design need to be considered.

Using co-simulation, it is possible to implement the SGAM model comprising multiple layers that interact with each other. In this regard, the work investigated by [5] presents a framework based on the combination of power systems, artificial intelligence, and communication to enable the simulation and analysis of agents in a smart grid context. Along a similar line of research, [6] focuses on the interaction of a multitude of prosumers in a social and electrical network using information and communication technological tools. In such a network prosumers are influenced by price-responsive generation and demand schemes that influence their decisions and are capable of responding to system changes. Such a modelling framework enables actor decisions to be propagated across the layers of the SGAM architecture, making it possible to emulate multi-layered complex dynamic model that lends itself useful in the evaluation of policy decision making by regulators.

Hence, co-simulation enables the exploration of the interaction amongst energy consumption, production, distribution and transmission, amongst different energy and non-energy infrastructures such as electricity, heat, gas, transportation and communications as well as socio-economic, environmental and technical phenomena. It opens up possibilities for addressing problems and questions that were previously beyond reach, and enable systematic assumption testing.

A co-simulation constitutes models, datasets and actors. Models are developed for defining system behavior, datasets specify the input and output streams of information and actors represent the entities that perform the decision making. These objects interact with each other in various forms, such as Model – Model interactions, Model – data interactions, Data – data interactions, Data – actor interactions, Actor – model interactions and Actor – Actor interactions. These different interactions can be implemented using different structures such as centralized, decentralized, tightly connected, loosely connected. Independently, each model provides a partial picture of the components and relationships underlying a given problem. Together, they provide a multi-dimensional, and constantly changing, representation of the system at hand.

We now present a co-simulation framework that was developed at the Faculty of Technology, Policy, and Management at the Delft University of Technology. The Energy Modelling Laboratory (EMLab) is a “suite of agent-based models dealing with policy questions on the long-term evaluation of the electricity sector.” It consists of three distinct models: EMLab-Generation, EMLab-Congestion, and EMLab-Network Evaluation. These models have been developed for different purposes and represent different dimensions of the long-term development and operation of Northwest Europe’s electricity transmission infrastructure [7].

EMLab-Generation (EMLab – G) explores the long-term effects of interacting energy and climate policies by representing how power companies invest in generation capacity. Modules inside the EMLab-G model comprise of market algorithms for representing the electricity spot markets and CO2 auctions, an investment algorithm for representing processes of investment in generation capacity and others. EMLab – G outputs csv files which are then supplied to the EMLab-Network Evolution (EMLab – NE) model. EMLab – NE focuses on the possible development trajectories of the Dutch electricity transmission network and is composed of multiple components. The EMLab – NE model comprises of agent-based submodels developed in Netlogo, and a contingency analysis submodel developed in MATLAB. Further, EMLab comprises of EMLab-Congestion (EMLab – C) that explores the dynamics in an electricity market subject to transmission line congestions. In addition, a data repository, Enipedia, contains information pertaining to the power grid, power plant information and details about the gas networks that feed information to the other modules and thereby facilitate their simulation. Thus it can be observed that a co-simulation framework such as EMLab consists of different models that interact with each other to capture various aspects of electricity transmission along the Northwestern part of Europe. 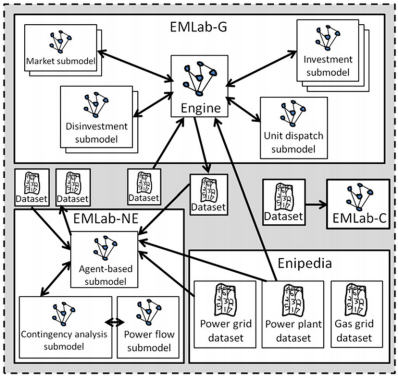 In addition, there is a rise of new actors operating at the distribution grid. Consumers are becoming more active in the control of their loads. Some of these consumers who adopted renewable energy systems such as solar panels and storage systems are able to even sell their electricity back to the grid. An entity called the aggregator is able to provide consumers and prosumers access to electricity markets in return for allowing them to perform direct load control and provide services to other actors at the distribution grid such as system operators (DSO, TSO), retailers and suppliers. Hence, we propose the development of a co-simulation environment at the distribution grid level, called Distribution Grid Energy Modelling Laboratory (D – EMLab), that can provide insights and analysis on the complexity involved. The elements that we intend to model in this co-simulation environment include the following: 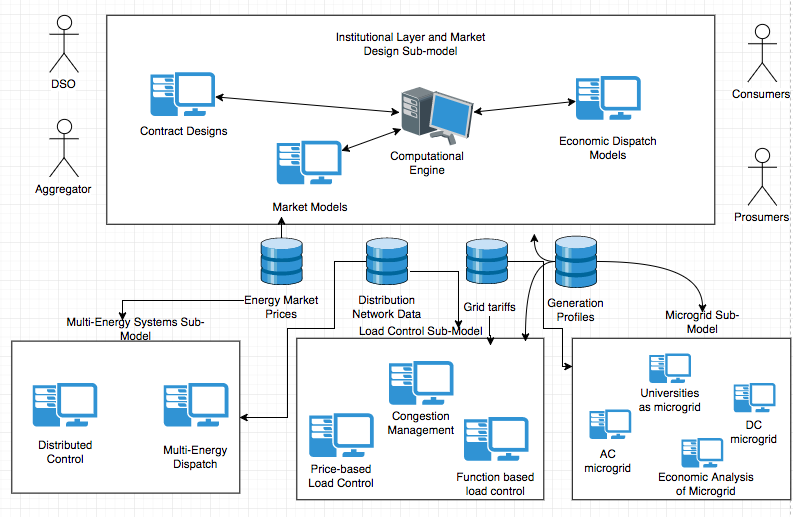 Inspired from the model represented in [8]

While Co-Simulation seems promising, it does have some challenges currently. As reported by [13], the challenges associated with co-simulation are as follows:

Even though co-simulation does face a few challenges, its future is promising. Co-simulation enables a multi-layer complex analysis of smart grids and provides feedback from physical components in almost real-time. To this end, the work of [14] presents a novel modular distributed infrastructure, based on real-time simulation for multi-purpose smart grid studies. Such a simulation setup, enables one to integrate high amounts of distributed generation technologies such as storage, electric vehicles and ICT technologies for a combined analysis of the system. Building on this, [15] proposes a real-time multi-site co-simulation framework in which control strategies for the interaction between smart grids and active prosumers in distribution networks can be tested. The additional aspect of multi-site real-time co-simulation is achieved by interconnecting multiple real-time digital simulators located in different laboratories that could potentially be placed at different geographic locations. This enables expanding capabilities of individual laboratories to study large-scale interdisciplinary problems. In addition, it enables technical cooperation between different parties while addressing issues of confidentiality, by limiting the amount of information shared between the decoupled models.

The work accomplished in [15] is extended in [16] where the attempt is to create a Pan-European distributed laboratory. The integrated distributed laboratory will be capable of facilitating the modelling, testing and assessment of power systems beyond the capacity of a single entity, by providing remote access to software and equipment anywhere in the EU, through real-time interconnections. Through such a distributed laboratory, it will be possible to enable integration of different sub-systems (distribution grid, transmission grid, generation, market, and consumer behavior) and analyze the results with a holistic perspective. Hence, the future and the possibilities that co-simulation can help unlock are promising.

View all posts by: Shantanu Chakraborty