A local energy community (LEC) is a set of residential or small industrial sites each acting as a prosumer, being equipped, in general, with generation units, battery energy storage (BES) units and loads. All the prosumers are connected to the same low-voltage (LV) distribution network, which is the internal network of the LEC and it is connected to the medium-voltage (MV) external utility grid.

The operation of a LEC needs the implementation of an energy management system (EMS) for the optimal scheduling of the available resources [1]. This post focuses on an algorithm for the day-ahead scheduling of the BES units. We assume that all the generation units of the LEC are photovoltaic (PV) panels and the effects of power loss in the internal network can be neglected. 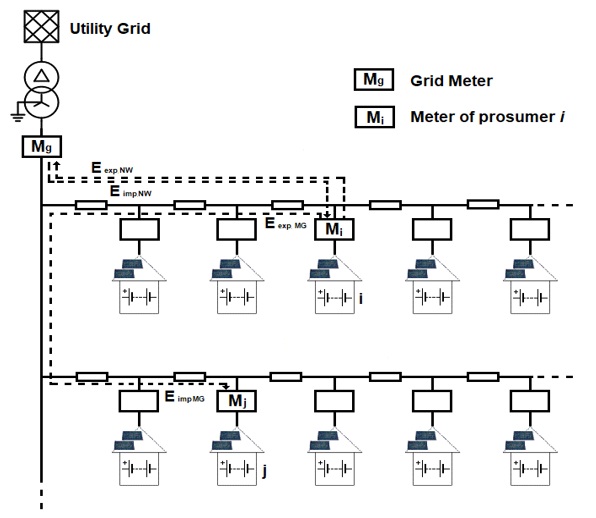 Figure 1. Scheme of the LEC

The centralized approach, in which a central control unit performs the entire optimization, implies that the prosumers communicate all the details of the equipment features as well as the load and production forecasts.

Under these conditions, the typical Objective function (OF), minimizes the total cost associated with the power exchanged with the utility grid where:

With the coupling constraint equilibrium between the energy bought from producer i by the other prosumers and the energy sold by producer i, and other operational constraints for each prosumer, for instance:

In order to preserve, as much as possible, the confidentiality of the features and forecast of prosumers’ equipment, the problem can be addressed by designing a specific distributed procedure based on the alternating direction method of multipliers (ADMM).

The distributed procedure provides the scheduling of the batteries to limit the balancing action of the external grid. With respect to a centralized approach, the adoption of distributed approaches, as the ADMM, is preferable for the solution of the problem considered, since it reduces the need for each prosumer to communicate all the features and forecasts of the its own units and loads to the other prosumers or to a coordinating unit (e.g [2]–[5]).  Furthermore, the distributed approach is compatible with the adoption of a distributed ledger technology (DLT).

ADMM is one of the most frequently adopted consensus methods [6] and it has been recently investigated also for the solution of scheduling problems in microgrids (e.g., [7], [8], and references therein). In particular, both [7] and [8] deals with similar multi-microgrid systems as the one considered in this paper, with the presence of local generation, BES units and the possibility to exchange energy with an external utility grid. Moreover, [8] addresses the uncertainty of renewable energy, load consumption, and energy prices through a robust optimization approach.

The objective function of prosumer k is

Fig. 2 presents a diagram of a proposed implementation of the ADMM algorithm, with the following characteristics: 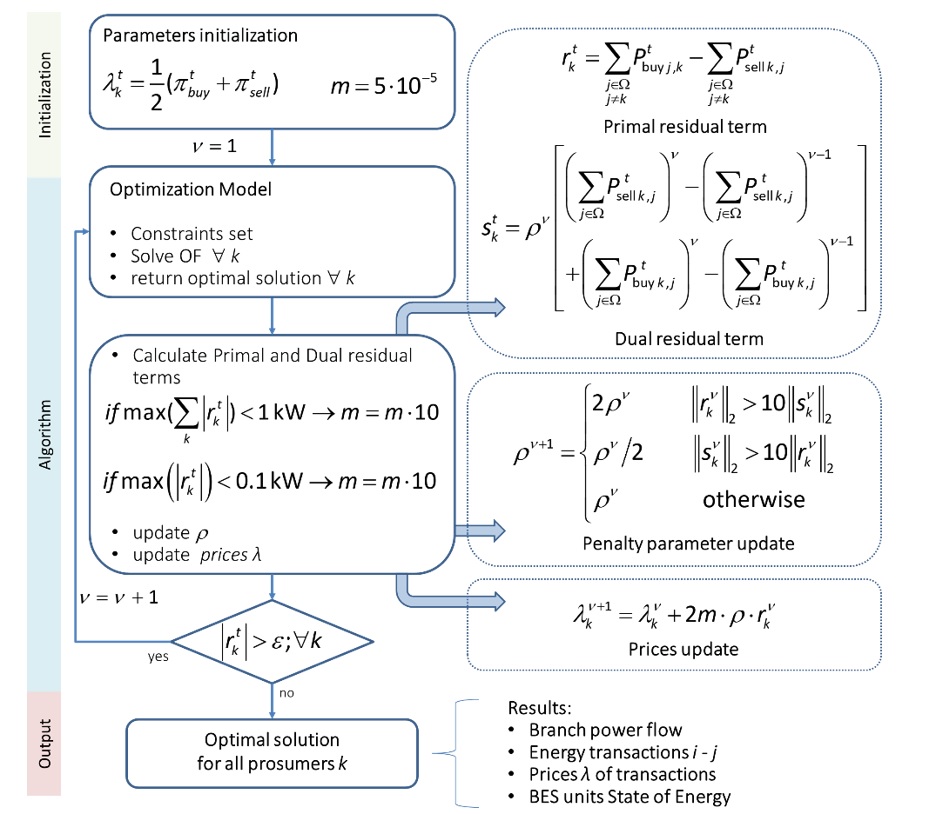 Once the procedure converges, the additional term  is zero and the value OF for the whole system is the sum of the ones solved for each prosumer k:

Both the centralized approach and distributed one allow the effective scheduling of the storage systems owned by the various prosumers.

Now, we compare the solutions obtained by applying the centralized and the distributed models for both a case study with the BES units and the one without BES units.

The comparison between the profiles of the power exchanged with the utility grid is shown in Fig. 3. As expected, the profiles are quite similar. This is reflected in OF values pretty similar for the two approaches.

Figure 3. The profiles of the power exchanged with the utility grid obtained by using the centralized and the distributed approach: a) without BES units (left) and b) with BES units (right)

The energy stored in the batteries provided by the distributed approach are in close agreement with those calculated by the centralized one (See Fig. 4). 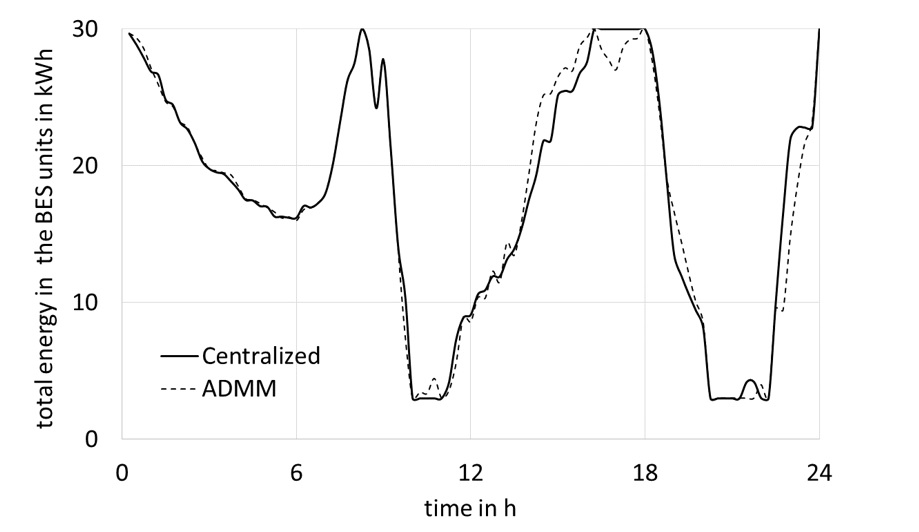 Figure 4. Comparison of the total energy in the batteries of the LEC obtained by the centralized and the distributed approach

The results obtained by using the proposed distributed optimization procedure based on the application of the alternating direction method of multipliers have been compared with those from a centralized approach based on a mixed integer linear programming model. The distributed approach has the advantage to reduce the information that each prosumer must share with the other prosumers.

We summarize the main results in the following points:

View all posts by: Camilo Orozco