An evolution towards smart grids: the role of storage systems

The impact of increased renewable generation on the existing grid infrastructure can be best summed up by the title of an article in the LA times “Power struggle: Green energy versus a grid that’s not ready.”  The operation principles of the current electric networks were established before the 1960s and it has not has changed much ever since. These networks still tend to have unidirectional power flow from the generation centre to the consumption points. A successful integration of renewable sources will require bidirectional power flow between the distribution and transmission sides. Another major issue is sparse infrastructure when confronted with ever increasing demand has degraded the system stability. A solution that has been touted is an evolution towards smart grids. The Smart Grid according to the IEEE “is an automated, widely distributed energy delivery network characterized by a two-way flow of electricity and information, capable of monitoring and responding to changes in everything from power plants to customer preferences to individual appliances”.  The Fig.1 shows the different aspects and functionalities deployed in a smart grid.  Interested readers can look up at the blogs from my colleagues where different aspects of smart grids, the latest developments and challenges are discussed. A vital cog in such smart grids will be energy storage systems(ESS) which provides the grids with a great amount of flexibility and self-healing capability with the aid of an adept control and communication system. When it comes to storage systems the common functionality that spring to the mind will be ensuring power balance in the network. Though that is the generic aim of storage systems the impact they create across the network and the different stake holders vary. 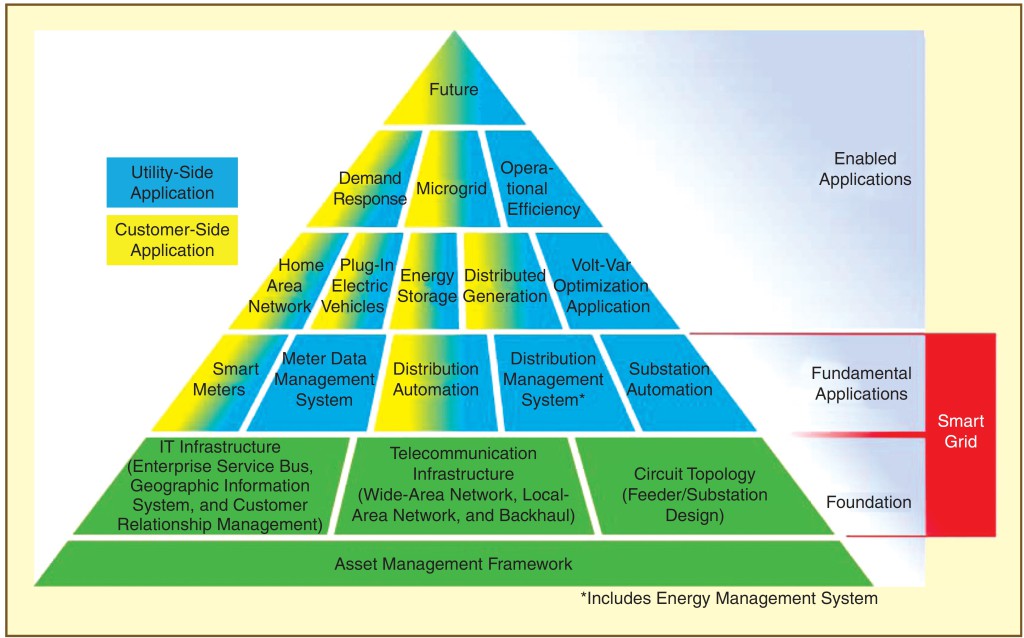 An introduction to  ESS and some of the widely used storage systems in grids were discussed in my previous blog entry.  In here the discussion will be furthered in the context of the different roles these systems can play across the network and its impact on the various stakeholder namely, power system operators, utilities and customers. In the case of utility operators, the benefits that can be drawn from storage system vary depending on nature of the storage systems, whether they are long or short terms storages. The long term storage systems provide functionalities like energy arbitrage, load levelling, peak shaving, non-spinning reserve and black start capabilities which improve the flexibility of grid operation. The short term storages cater mainly towards improving power quality through ancillary services like frequency, voltage control.  A major application of storage system for power system operators is enabling the increased penetration of intermittent and non-dispatchable renewable sources. The ESS help smoothen out the fluctuations introduced by renewable sources more cost effectively than any other existing technology. They can also improve the resilience of grid by providing back up power during increased and prolonged outages caused by extreme weather scenarios.

Utility services including the transmission and distribution networks are mainly benefitted by the ESS through upgrade deferral of these networks, by providing resource adequacy and congestion relief. Through proper deployment of ESS infrastructure upgrade can be delayed or entirely avoided providing economic benefits. They can also provide cheaper alternatives to generation upgrade and alleviate congestion in the networks during peak hours. In the customer level the deployment of ESS as a behind the meter system can provide bill management capabilities by enabling selective drawing of power during periods of low power pricing. In the customer premises they can ensure more self-sufficiency for prosumer (producer/consumer) effectively managing the power within them with minimum interaction with main grids. They can also provide ride through capabilities during minor grid anomalies and improvement of power quality. 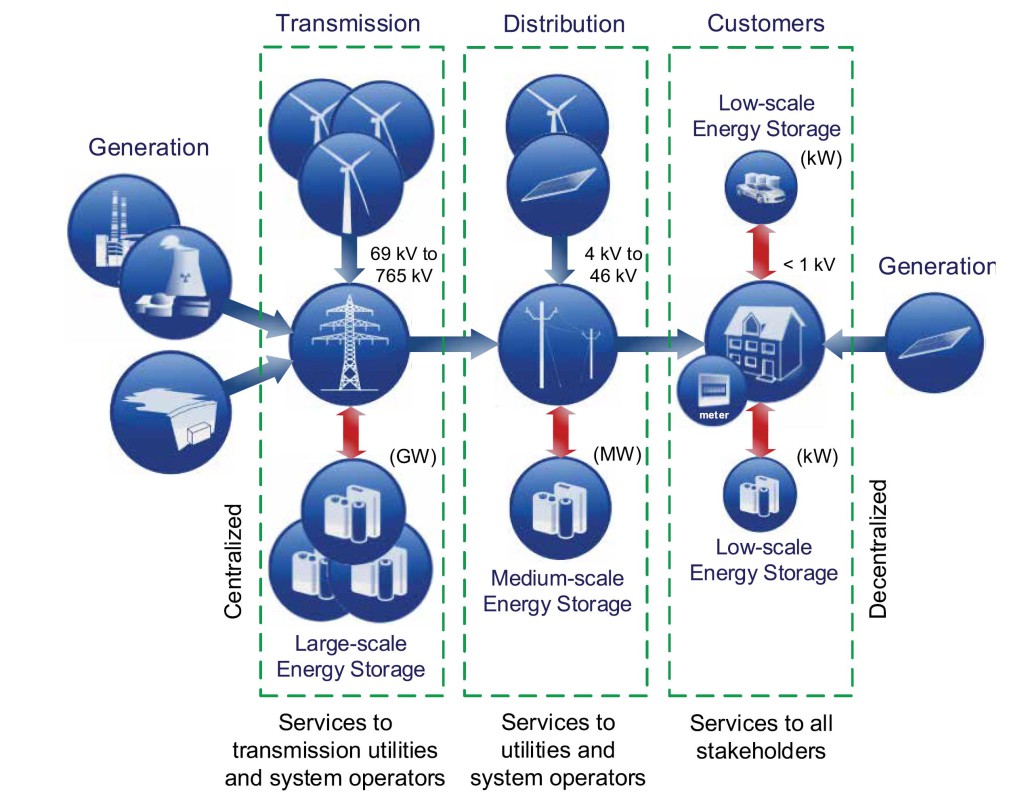 The Fig.2 show the integration of ESS at different levels of the power network. The multitude of functions, discussed above, that can be carried out by the ESS also depends on its level of deployment. The more farther the deployment of the ESS the more functions it can perform. In this context the ESS at the customer premises can provide most of the functionality for the different stake holders mentioned above. Whereas the ESS deployed at the distribution level can miss out on some functionalities like bill management for the customers. Similarly, bulk ESS which are usually deployed at the transmission levels cannot defer the upgrade of distribution level infrastructure but still retains most of the functionalities aiding system operators [2][3].

Drivers and challenges of energy storage systems in smart grids

Despite the flexibility and applications that storage systems provide, as a technology they have not been widely deployed in electric networks historically (though it is changing nowadays). The deployment status of the storage systems and its real/time utilisation can be monitored in this interactive web interface. There have been many drivers behind the increased deployment of storage systems and one of the most obvious ones is the evolution towards smart grids. According to the Department of Energy, USA the flexibility, self-healing, resilient nature of the smart grid coupled with the optimal utilization of resources and need for increased operational efficiencies can be achieved with storage systems. The other major drivers of the storage system technology include [4]:

Despite all these drivers the integration of energy storage systems does not come without its challenges which include [4]:

Despite these roadblocks storage systems are slowly making inroads into the modern grid infrastructure and this is necessary if the transition to smart grids is achieved sooner rather than later.