The role of hydrogen in the energy system

There is global concern about the harmful effects to the environment of power generation methods based on fossil fuels, as well as uncertainty regarding the limited amount of these sources. Both things have caused the need to develop more sustainable and environmentally friendly energy production methods. In this scenario, hydrogen and hydrogen technologies can play a very important role. 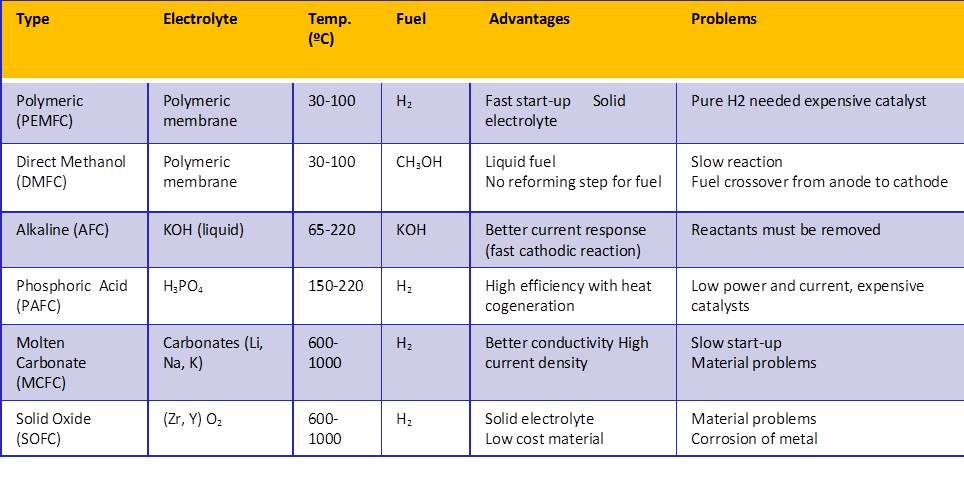 Fuel Cells (FC) can cover the need for more sustainable energy systems. The different types of FCs are summarized in Table 1. The most popular ones are the PEMFC ones. PEMFCs are electrochemical devices based on the transformation of the chemical energy of hydrogen into electricity and heat. They are much more efficient than fossil fuels for the production of electricity. They also have an ecological functioning since the product obtained by chemical reaction is water.

Hydrogen generation is a problem by itself. To make FC a clean power generation system it is necessary to generate hydrogen in a clean manner such as using renewable energy, while if the production method is not sustainable, the final balance of the system will not be, in general, positive. However, Hydrogen can be obtained from water electrolysis, from various forms of renewable energy.

Once hydrogen has been produced, it can be distributed to users by pipelines to the users to produce electricity, or it can be stored. There exist different ways to store hydrogen: in gaseous form, in liquid form, or in metal tanks. The latter being the cheapest and most reliable approach. The stored hydrogen can be used to generate electric energy or be used in other types of applications such as mobility. Currently, most car companies have hydrogen-powered vehicles. 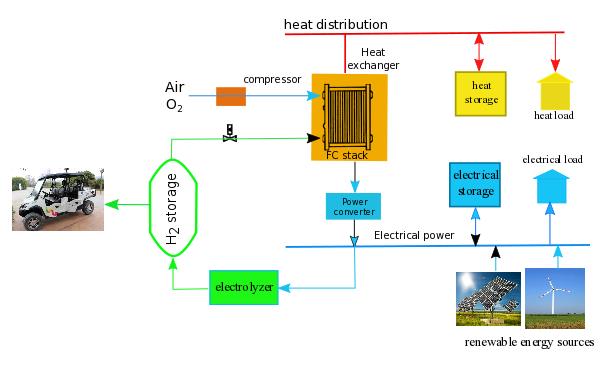 The combined use of the fuel cell, the storage system and the electrolyzer allows hydrogen to be considered as an Energetic Storage System (ESS). This facilitates the integration of fuel cells into microgrids, not only as an emergency generation element but also as a storage element (see Figure 1).

An advantage of fuel cells versus other energy transformation elements is that the reaction produces heat. This heat can be used in certain types of applications such as comfort. Combined Heat and Power (CHP) applications substantially increase the efficiency of the FC system. FC based CHP systems (see Figure 1) are very promising for achieving more sustainable and efficient energy methods. Countries like Japan and South Korea are leaders in the implementation of these systems, and the countries of the western areas have been planned implementation targets for the next years.

View all posts by: Ramon Costa-Castelló