According to the literature on infrastructure systems, they are mainly defined as those systems of independent, mostly privately owned processes that work collaboratively and synergistically to produce and distribute a continuous flow of essential goods and services. Among all infrastructure systems, those whose incapacity or malfunctioning would have a negative impact on social and/or economic security are regarded as critical infrastructure systems (CIS). These systems may be geographically distributed or decentralized with a hierarchical structure. Each resultant sub-system is composed of a large number of elements with time-varying behaviour, showing numerous operating modes and subject to changes due to external conditions (e.g., weather) and operational constraints. Therefore, the understanding of their behaviour, interdependence and the proper approach for their suitable management under certain adverse situations is a hot topic of constant research [1].

Particularly, in the current development of electrical energy grids, distributed generators and storages play an important role in the power generation. Furthermore, such systems may cover a large geographical area. Those features imply the necessity of a reliable non-centralized control method. Moreover, current electrical grids may also possess time-varying topologies. For instance, electrical vehicles, as ones of the components of the grid, move around and are connected to different charging points at different time instants.

Previous ideas highlight important aspects from the energy networks as CIS and point out strategic issues to be handled. The importance of decentralizing the energy in order to overcome challenges becomes in a priority task nowadays. Decentralised energy, as the name suggests, is produced close to where it will be used, rather than at a large plant elsewhere and sent through the national/central grid. This local generation reduces transmission losses and, e.g., lowers carbon emissions (see Figure 1). Relevant advantages are derived from decentralizing the energy production [2]: 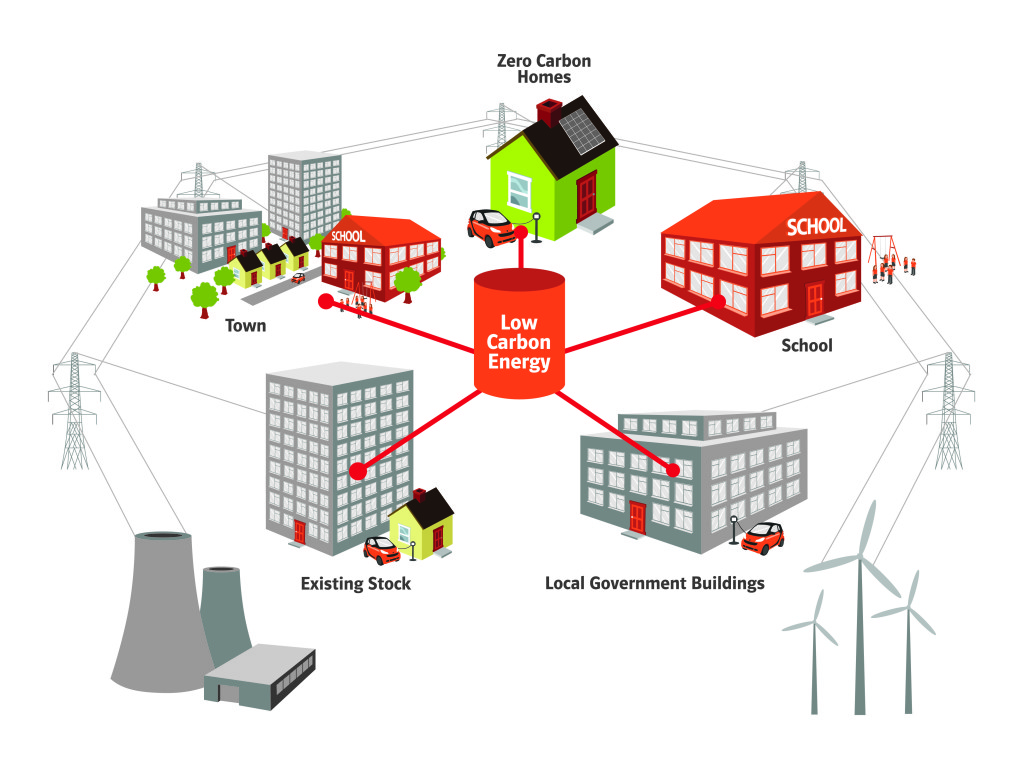 Different aspects different from the reduction of carbon-based energy production could lead to the distributed/decentralized energy generation. One of those aspects is related to the sensibility of the electrical networks facing exogenous disturbances, not necessarily related to their operation. That is the case of the natural disasters [3]. It was for instance the case of the Hurricane Harvey, which in September 2017 caused power outages to thousands in and around Houston, with floodwaters making it still impossible to restore power to many customers. Among the taught experiences from that event was evidenced the vulnerability of energy infrastructure.

The mitigation of these risks may start with the decentralization of the electricity grid. Microgrids, in combination with distributed energy generation, provide a system of small power generation and storage systems, which are located in a community or in individual houses. While connected to and able to feed excess energy into the grid, these generators are simultaneously independent from the grid in that they can provide power even when power from the main grid is not available.

Safety benefits from a decentralized grid are immense, as it has build-in redundancies. These redundancies are needed should the main grid become inoperable due to a natural disaster or terrorist attack. Communities or individual houses can then rely on microgrids with distributed electricity generation for their power supply. Furthermore, having less centralized electricity generation and fewer main critical transmission lines reduces targets for terrorist attacks and natural disasters.

Integrating renewable energy sources in the current electricity grid does not necessarily mean that the energy grid is automatically decentralized. Moreover, it could be intuitive the way of splitting a whole electrical network into several local self-managed sub-networks and/or microgrids. However, depending on the policies of connection, power management and governmental regulations, the topologies for the resultant parts are not obvious. It is then necessary to determine the way of determining those local subsystems before implementing supervisory and management algorithms facing reaching the overall objectives while rejecting negative effects potentially caused by external agents.

Summarizing, before designing and proposing innovative strategies of distributed management of electric networks, it is quite relevant to determine how such systems should be decomposed and which the nature of the resultant subsystems is and then stat to face with recognized problems within the world of automatic control for large-scale complex systems. As a consequence, research in partitioning methods, in particular for electric networks, is of great interest nowadays in order to solve the first step into the chain of tasks towards the decentralization of the energy production and the proper management of the whole electrical system.

View all posts by: Carlos Ocampo-Martinez