Towards distributed control of wind energy

Wind turbines have become a symbol of environmentally friendly energy sources. The white three-bladed turbines are now a part of the landscape in many areas of Europe and are responsible for the generation of a significant part of the electrical power. This success is, to some extent, due to technological advances that allowed cost reduction and lifetime extension of wind turbines. The energy of the wind is free, but to capture it is not. Wind energy cost comes basically from the investment, operation and maintenance. Ensuring a long operating life with minimum unproductive stops is crucial to keep the energy cost low. Maximizing the profit of the investment is also important to operate the turbines in conditions that maximize the energy harvesting and prevent damages during extreme events.

Nowadays, wind turbines work in groups called wind farms. These groups, which can include a large number of units, make wind power plants closer in size to conventional power plants. This fact reduces operating costs but also introduces problems in the electrical grids and disturbances in the air flow that can affect the power generation. An undesirable characteristic of wind energy is its variability, sometimes wind is blowing, sometimes it is not and the change can be very sudden. If these sudden power changes are injected into the grid, they can make the system unstable resulting in voltage fluctuations and even in highly undesirable blackouts.

Modern wind turbines rely on dedicated industrial computers to ensure proper operation. At wind farm level, supervisory computers monitor and coordinate the operation of each turbine in order to smooth the generated power and minimize the impact of the power fluctuations on the grid. The control algorithms, the program running in the turbine and farm supervisory computers, receive information about the system state from many sensors and send commands to adjust the operation to the current conditions. This feedback process is great to ensure that the system will adapt itself to different conditions, but corruption or interruption in the information flow might cause undesirable effects. Traditionally, wind farm control is implemented in a supervisory computer, receiving and sending information from all the turbines and electrical system operators. This maximizes the information the supervisory control has, but makes it vulnerable to loss of information. This also requires a significant computing power in order to process the information and produce the commands for every wind turbine, ands is even worse if some optimization is run in the control algorithms.

Modern wind farms can be seen as smart grids in which many intelligent agents (wind turbines) exchange information with their neighbours to produce a desired global behaviour (a given power profile). Instead of a powerful computer centralizing the control of the entire wind farm, the responsibility can be shared with the rest of wind turbines. In this approach, the turbines talk to each other in order to agree on a global outcome. In the automatic control field this is known as distributed control. That means algorithms running in each agent taking decisions with partial information about the farm state provided by some of the other agents. This is a very active area with the most widely spread results in the control of drone formations emulating the behaviour of flocks. The shared responsibility makes the system more resilient and also reduces the need of high computing power. The use of these techniques in wind farms is just starting and showing great potential. The challenge is to ensure the cooperation and coordination of the agents to achieve the desire power regulation with a limited amount of information, in a system (wind farm) that presents strong interactions among agents (wind turbines). 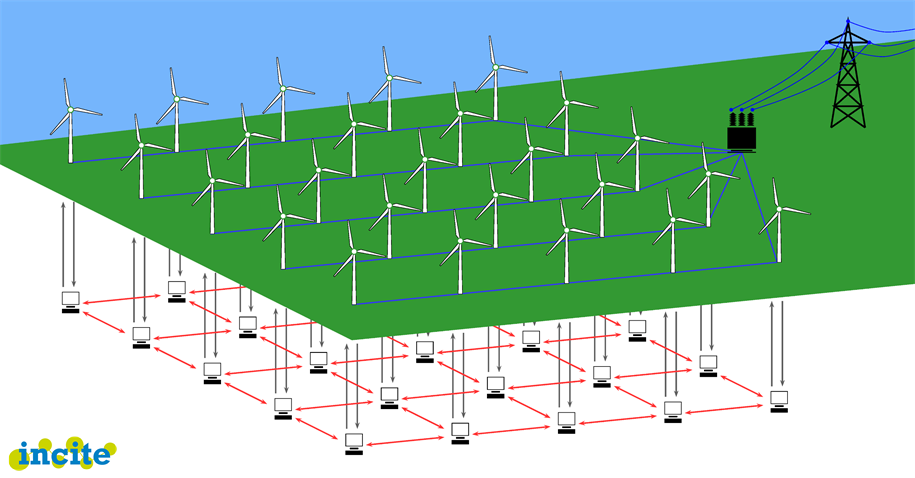 View all posts by: Fernando Bianchi