Synchronization is a fascinating and fundamental physical phenomenon found in many different systems with vastly different sizes. It can be found in mechanical, biological or chemical systems as well as human behavior or human made structures, for example in power systems. The first observation and description of synchronization was made by scientist Christiaan Huygens in the 17th century. Huygens observed that two pendulum clocks, connected by a wooden beam, would start to swing simultaneously. After a while, their movement was so in phase that the sound of each clock was heard at the same time. Furthermore, even after disturbing the synchronized motion, the system would return to synchronized behavior after a short time. This behavior would today be called stable synchronized motion.

A very illustrative example of synchronization are metronomes, as illustrated in the following video:

While synchronization was discovered a long time ago and serious scientific interest can be dated back to the work of van-der-Pol in the 1920s, a full understanding of synchronization is still not possible. Synchronization is a non-linear effect [2], which makes all analysis difficult. Many effects can only be explained by computer simulations or analyzed in simplified systems.


Synchronization usually appears in system with the following properties:

Sometimes, this will result in synchronized clapping, as observed in the following video:

In fact, some features usually found in synchronized system can be identified in clapping audiences [1].

In many man-made systems, as well as some systems in nature, only certain oscillators are directly coupled. For example, the intestinal smooth muscle of mammals oscillate with an intrinsic frequency and are electrically coupled to only neighboring cells. The synchronization of these cells will trigger the contraction of the muscle.

Which oscillators are coupled in a large system can be studied by the connections network and its graph structure. Each connection in the network corresponds to a real-world coupling between the two oscillators.

The structure of the underlying network will have a great influence in the behavior of the systems and especially its synchronization. Consider the two example networks with N = 4 oscillators: 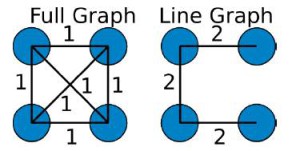 Here, an order parameter of 1 corresponds to total synchronization. It is clear that the full graph is synchronized, while the line graph is not. In general, a densely connected network will synchronize more easily.

In the power grid, the electrical frequency, which is linked to the rotating frequency of the rotating masses, should be identical. The individual devices are coupled via the transmission network and the structure of the network will influence the stability. This coupling may result in spontaneous frequency synchronization. While the full power system is heavily controlled and regulated, the property of natural autonomous synchronization is very important for the stability of the power system.

3.1. Challenges in the study of synchronization

The autonomous synchronization of the power system is a key to stable operation. As discussed previously, stable synchronization in complex networks depends on the shape of the network. With the inclusion of renewable energies, storage units active demands and other advanced components in the power grid, the complexity of the network will increase (see also the blog article from Nicolas Retière [3]). Many technical advancements towards smart grids, like energy storage (with the problem of low inertia) or demand forecast and management are made, the natural stability of the power system has to be considered. Challenges include:

For more insight into synchronization, the book [2] and the following TED talk by Steven Strogatz are recommended: