Solar energy: the once and future king

Solar energy is inexhaustible. The amount of solar irradiation that reaches the Earth’s surface is tremendous: approximately 10,000 times more than the current humanity’s energy needs for a whole year [1]. Besides solar power, many other forms of renewable energy such as wind energy, hydropower and biomass depend on the Sun. Wind, used by wind farms to produce electricity, is created by the differential heating of different regions of the Earth; Water evaporates because of Sun’s heat, forming clouds and then through rain water masses are transported in higher altitudes thus creating a potential energy difference of water that hydropower plants take advantage of; organic matter stores energy through the process of photosynthesis which wouldn’t be possible without the Sun.

But is solar energy truly a new form of energy? Let’s take things from the beginning.

The Mythology of the Sun

The Sun; a star 150,000,000 km away from Earth with a radius of 695,508 km (109 times the radius of Earth) [2]. Undeniably, the source of life on Earth. Humans quickly understood its vital role in sustaining life on Earth and worshiped the Sun as a God. In many ancient civilizations, deities such as Surya in India, Mithra in Persia, Shamash in Babylonia, Amun-Ra in Egypt, Helios (“Ήλιος”) in Ancient Greece and many more, were associated with the Sun. According to Greek mythology, the Sun was the son of the Titan Hyperion (“Υπερίωνας”) and Eurydice (“Ευρυδίκη”) and his sisters were Selene (“Σελήνη”: Moon) and Io (“Ηώ”: Dawn) [3].

From Religion to Science

The Ancient Greeks were the first to demystify the Sun and tried to understand its nature, developing different theories over the centuries. The 3rd century B.C., Aristarchos the Samian ("Αρίσταρχος ο Σάμιος"), followed the teachings of Pythagoreans who were the first -back in the 6th century B.C.- to question the geocentric theory and formed the hypothesis of the heliocentric system. He also proposed the simultaneous rotation of the Earth around its axis on a daily basis and its movement in a circular orbit around the Sun on an annual basis [4].

At the same time, the Ancient Greeks in the West and the Chinese -before them- in the East, were trying to figure out how to take advantage of the beneficial effects of the Sun’s rays and harness their energy. They designed their houses in order to optimally use the Sun, keeping them warm during the winter and cool in the summer. Houses were built with a south orientation and cities were designed in such a way so that every house would be equally exposed to the winter Sun [5]. This technique, known as solar architecturei, along with the use of burning mirrors (used to produce flames) were the first two uses of solar energy.

Many centuries passed and several solar applications emerged until the year 1839, when the biggest milestone in solar energy was reached. The French physicist Alexandre-Edmund Becquerel discovered the photovoltaic (PV) effect, a way to produce electric current from sunlight. In 1883, Fritts constructed the first PV device made by Selenium (Se) [1]. Seven decades later, in 1954, Bell Laboratories announced the creation of a 6% efficient silicon (Si) solar cell [7]. Another milestone was reached in 1958 when Vanguard I, the first solar-powered satellite, was launched at Cape Canaveral, Florida [8]. Since then and especially during the last two decades, the solar sector has experienced a remarkable growth. 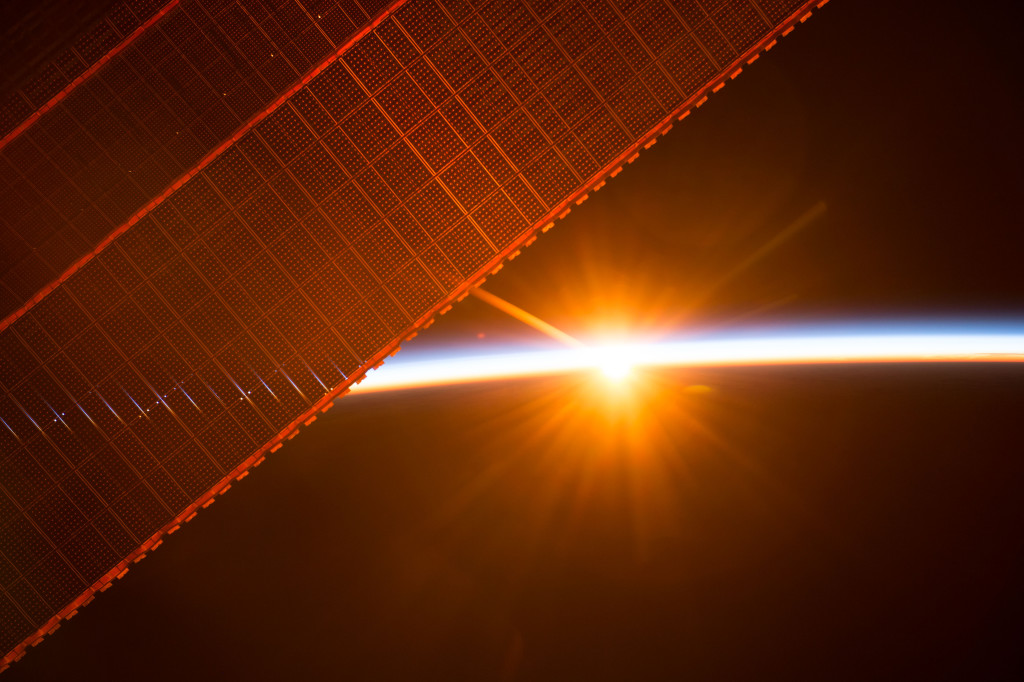 Nowadays, there are 3 technologies that dominate the solar industry: Solar Water Heating (SWH), PV and Concentrated Solar Power (CSP). The most widespread among them is the SWH, which converts sunlight into heat, with residential SWH systems being vastly deployed in countries with high annual mean irradiance. The other two technologies, PV and CSP, convert sunlight into electricity. PV devices convert sunlight directly into electricity while CSP systems use lenses to focus a large area of sunlight into a small beam.

A list of the major applications of PV power systems is provided by the International Energy Agency (IEA) [11]:

The global PV installed capacity (off-grid and grid-connected) by the end of 2015 was 228 GW representing the 1.2% of the global energy demand [11]. 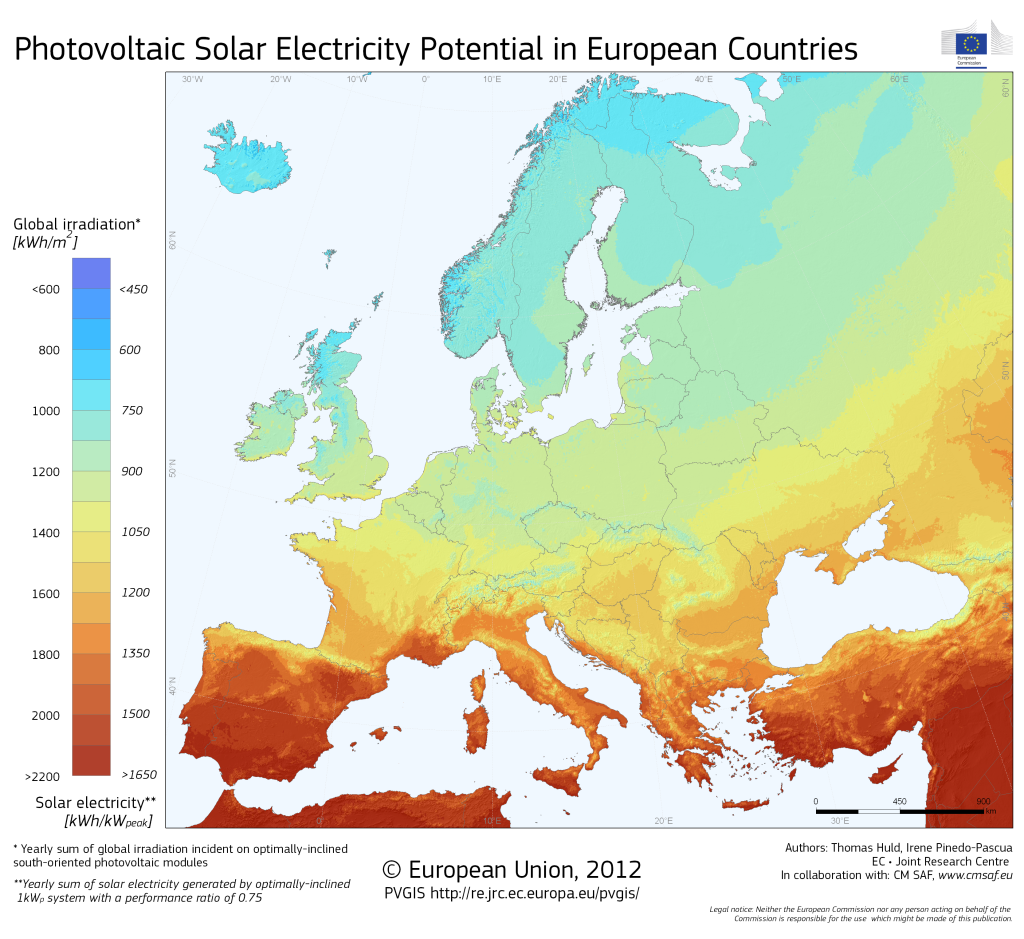 In order for the solar energy to dominate the energy sector three main obstacles need to be overcome. Cost, scale and intermittency, with intermittency being the most important of the three [12]. Component and module costs have been drastically declining the last few years but PV installations remain competitive because of certain policies that promote PVs with incentives. Scaling up won’t pose a problem to the production of PVs since the chemical element on which the current technology is based on, silicon, happens to be the second most abundant element in Earth’s crust. However, if other emerging non-Si technologies prevail, shortage of raw materials is possible but unlikely. Furthermore, solar power is intermittent and variable since it depends on the amount of solar irradiance that reaches the Earth’s surface. The solutions to intermittency are: accurate irradiance forecasting and storageii.

Finally, the outdated design of power systems comes to add to the three previous obstacles. Power systems were originally designed to support only the transmission and distribution of bulk power from power plants to consumers. The integration of distributed energy sources is not a trivial task; new challenges such as the bidirectional power flow and others, arise [13]. The answer to these problems is one: smart grids.

Many definitions of the smart gridiii exist [14]. In Europe a smart grid is defined as “an electricity network that can intelligently integrate the actions of all users connected to it – generators, consumers and those that do both – in order to efficiently deliver sustainable, economic and secure electricity supplies” [15]. It is therefore the smart grid that provides the necessary tools -automation, communications, bi-directional flow of energy, data, and storage- that facilitate the integration of renewable sources such as PVs.

i More information on green buildings: Why do we need to make our buildings more “energy flexible” ?  by Thibault Péan

iii A nice simplified overview of the smart grid and its aspects is provided by the U.S. Department of Energy on the following website:    https://www.smartgrid.gov/the_smart_grid/