Since time immemorial, electrical power quality issues have been a relevant topic considering every consumer expects to receive the best quality service. Whilst expecting constant, reliable, and stable electricity, consumers also desire to be able to power just about any device available to them, unaware that so many of this devices cause problems that the electrical grid must deal with. Such problems include harmonic and power distortion that flows back to the source, unbalances, and resonances amongst other issues. Nearly all of these issues can be traced back to non-linear loads such as air conditioners, welding machines, household electric machines (washing machines, dryers, etc.), and household transformers. Historically, such problems had been restricted to the consumer side of the system – the distribution grid.

Then came the advent of affordable power electronic switches that allows electricity to be consumed in the most efficient ways known. Nearly every device today, from NASA satellites, particle accelerators, to X-ray machines and MRI scanners, computing devices and computers, nano-electric devices, and bulk electric power devices, all employ some form of power electronic switches of varying configurations, designs and materials, fit to application. However, power electronics solves one of the biggest problems of power consumption, and introduces another dimension of problem that incredibly complicates harmonics and power distortion due to the vast number of devices fitted with power electronics as mentioned before. But this is just the beginning of the story as most of these devices can still be considered consumer devices.

One of the biggest challenges of power electronic switches is the harmonic distortion they generate due to drawing energy in ‘slices’. That is, the distortion in the sinusoidal waveform by waveforms of other frequency. In general, the output of traditional generators that provide the electricity that we consume is a near perfect continuous sinusoidal waveform depicted by the blue waveform in Fig. 1a. This is the form of energy available at the consumer level referred to as the alternating current (ac) waveform. However, power electronic switches can only switch in discrete steps. Now, to convert say from direct current (dc) waveform to ac, power electronic switches need to recreate the continuous sinusoidal waveform. Earlier switches were so slow that the created waveform often significantly differs from those of the real sine wave. The black waveform of Fig. 1a is a recreation of the sine wave by switches. As can clearly be seen, the created shape is not matching with the original waveform. The difference between both (shown in red) often results to harmonic distortion of currents. In general, the larger the area of the red boxes, (that is, the slower the switch), the more the harmonic distortion in the supply. Then came the advent of faster power switches that could switch states more than a million times per second! Such results to less harmonic distortion as shown by the area of the red boxes in Fig. 1b with a faster switch (the total area of red boxes is almost as less than that of one box in Fig. 1a). However the faster switching introduces another problem such that it relies heavily on control and the speed of control, and also requires complex control systems to control other variables due to complexity of system. Control then introduces its own dynamics further complicating the system.

Harmonic distortion is in general a factor of how fast energy is drawn, or recreated using switches; in principle, how fast the transition (switch) from one state to the other is. Theoretically, the faster the switching, the lesser the harmonic distortion, but such a statement does not consider many other important factors such as material limits, control, state-of-art of technology, etc. To have a faint idea of the effect of harmonic distortion, try to think of an MRI that produced distorted images due to distortion of the power used to drive the device. Speaking of ‘law of conservation of misery’ – a solution that brings its own problems. 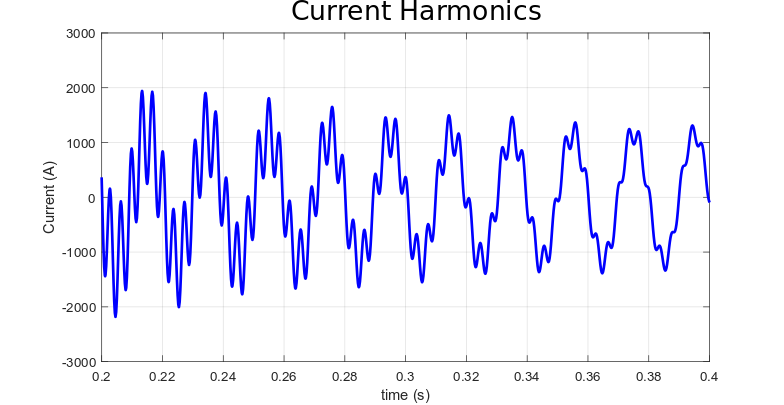 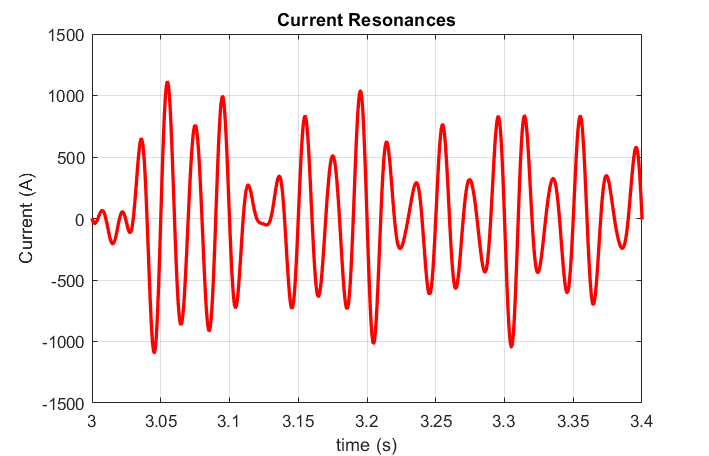 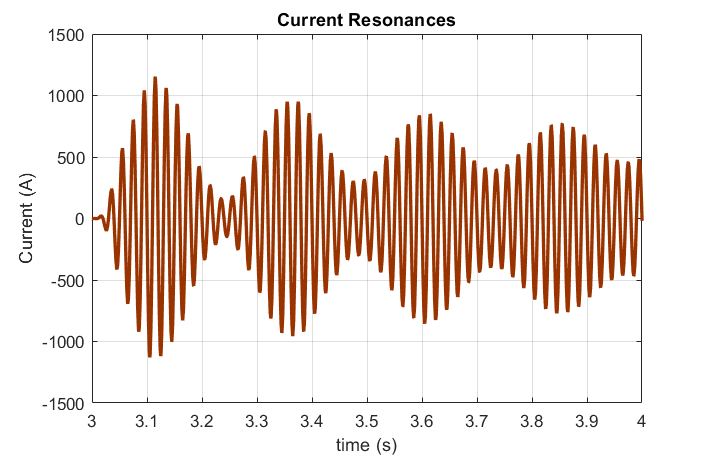 Manufacturers and electric distribution system operators have found pretty neat ways to deal with harmonic distortion caused by switching devices and this is a well-established sub-field of power distribution and experts have sought to deal with the issue both at the device and system levels considering that these harmonic distortions are in general in orders of the switching frequencies. Resonances and stability on the other hand, are a bit more complicated as their frequencies can rarely be predicted as they often depend on several factors including, switching frequency, controllers, operating conditions at a specific instant, contingency events, system impedances; all difficult to predict. Thus, resonant frequencies change constantly over time, and so does stability margin. Such resonances could take any form of Fig 2a, Fig. 2b, Fig 2c, and literally infinite forms and range of frequencies varying continuously over time which make them also difficult to eliminate. This is because traditional means of filtering them out are at most suitable for a specific range of frequency. Thus, when the range of frequency of distortion changes, the filter should also change.

As of this moment in the EU, nearly every new wind power generator over the last five years to date was integrated into the conventional power system via at least 1 power converter. This does not include solar power plants where power electronic converters are required for grid integration, irrespective. For large wind farms, there could be at least 2 power electronic interfaces with size ranging from the size of an oil platform to a large as a football field. Broadly speaking, one device is closer to the wind plant, and another closer to the collector point. To understand how much power electronic device will be in play; the typical wind turbine generator has a power range of 2-8 MW (>10 MW generators are almost about to enter the market fully). Conservatively, each generator could be assumed to generate an average of 5 MW of electrical power. For a wind farm of 100 MW installed capacity (again, average), that is at least 20 power converter. The average wind energy project in the EU is about 150 MW. Spain just awarded contracts for almost a 1000 MW!  In developed regions, the average installed capacity of the conventional system is around 30,000 MW. If renewables are expected to replace existing generators (of which wind and solar are expected to play huge roles, the enormous amount of power electronics devices required can barely be imagined. This does not take into account FACTS devices, power flow controllers, HVDC converters, etc. which are expected to play huge role in the flexibility of future power systems which we badly need. However, the high switching frequencies for current devices has made it relatively easier to filter switching influenced harmonics. The rule of thumb is that the higher the harmonic frequency, the smaller the components needed to filter out harmonics and, thus, the ease. Therefore, for a system with pervasiveness of power electronics, Fig. 2a, 2b, and 2c has become the norm, whilst challenging the security and reliability of power supply.

The main concern, particularly at the transmission level are low frequency oscillations and resonances below the system 50/60 Hz frequency, referred to as sub-synchronous harmonics and resonances, and those a few orders above the 50/60 Hz influenced by an interconnected ac and dc network coupled by power converters. Our work over the last one year has shown that with an increasing capacitance on the DC side, low frequency oscillations as low as 0.4 Hz are possible, despite the well-known observation that increasing capacitances on the DC side tend to reduce the magnitude of resonances. A potential challenge is that, as MTDC (Multi-terminal DC) grid becomes a reality and, the effective capacitance at each terminal is a factor of the total impedance in the DC grid – in other words, the system becomes more capacitive. Such low frequency oscillations are usually of very low magnitude and challengingly hard to detect and costly to mitigate even when detected. Traditionally, eigenvalue theory has been used to detect these low frequency oscillations and their root causes. They eventually threaten system reliability and supply security, by creating stressful events that in turn excite other events. More so, the system is becoming increasingly large, combining both the conventional ac grid, and the dc grid introduced by the power converter of which both grids behave differently, thus eigenvalue theory might to tell the whole story. Therefore, interaction of power converters within the dc grid is increasingly possible, whilst interactions between whatever is left of synchronous generators in the ac grid are a possibility. The same is true of interaction between the ac and dc terminals of the converter. In any case, both grids must be guaranteed stable at all times. Notwithstanding the challenges of power converters, the key to solving this problems lie in better control systems and algorithms. However, control design in turn relies heavily on mathematical models that are difficult to obtain given the complexity of the system. This is the major issue my thesis aims to address.

The main challenge in the academic research parlance has been mathematical modelling. Modelling has been the foremost means of investigating and controlling complex systems, where physical lab set-ups are not feasible. The electric power system as we know it is the largest physical system and the most critical infrastructure of any economy. Though advances in real time digital simulations have made it relatively easy to validate mathematical and analytic models for accuracy and trustworthiness, modelling is still the Achilles heels of power systems research.

The conventional AC grid is already complicated enough to model, and then to include the DC grid with a different time scale of dynamics is more challenging. Software that models the AC grid exploits the distinct time frames of phenomena in the power system ranging from a few ms to days. On the other hand, the DC grid dynamics are much faster in the order of µs.  For most research efforts that tried to demonstrate both grids simultaneously, one is usually favored, with the other duly simplified. Favoring one over the other makes it difficult to investigate interactions and behavior contributed from one to the other. Although, justifiably, such simplifications is the key to isolating root causes. Such include dynamic transfers from the DC to the AC, particularly, the influence on the AC grid, of events occurring in the DC grid. The next question becomes, how both grids can be modelled on the same philosophy, irrespective of the distinct time frame of dynamics of each, in order to see how events in one grid influences the other? Answer to this question may be the key to investigating new phenomena and possible challenges to future deployment of both grids.

Modelling both grids hand-in-hand with some considerable detail is central to control design and stability analysis of future power systems, which in general are important for slow varying oscillations. Furthermore, due to costs of mitigation if traditional methods are to be applied, the control systems of power converters are the most effective means of mitigation. They are considerable fast in response, adaptable to changing operating conditions, and key to system resilience. This is an area where the well-known impedance models from classical power systems have found use, since at a physical level, the entire system can be seen as a complex combination of impedances which are well established predictors of system performances. Now, with the added advantage that, with a power electronic converter, we can adapt these impedances with the controls of a converter (at least at the point of connection of the converter to the system) to any desired response, which is the focus of current research.

View all posts by: Adedotun Agbemuko