Introduction to electricity markets, its balancing mechanism and the role of renewable sources

Unlike many other commodities or goods, massive storage of electricity is in general not affordable. In particular, when we look at the things that an average human being consumes on a daily basis, e.g. food, clothes, oil, gas, medicines, etc., we observe that most of them have the common feature of being stored somewhere and available for human consumption whenever it is necessary.

In contrast with these, electric energy has no realistic means to be stored and then delivered under consumer demand. This does not mean that technology to store electrical energy does not exist; battery systems have increased their performance and storage capacity in recent years, and in fact, they are a key element in several areas of the energy market. However, the amount of electrical energy that these type of systems can store is limited, and in general, electricity must be consumed as it is being produced.

At this point you might be wondering, if the electricity is consumed as it is being produced, does that mean that whenever I turn on/off a light bulb there is a power plant increasing/decreasing their production? How can that be even feasible in real time? What would happen if something goes wrong and the demand is bigger than the supply or the supply bigger than the demand? While the answer to the first two questions is slightly more complex and requires a paragraph of its own, the answer to the latter is simply a generalized blackout. 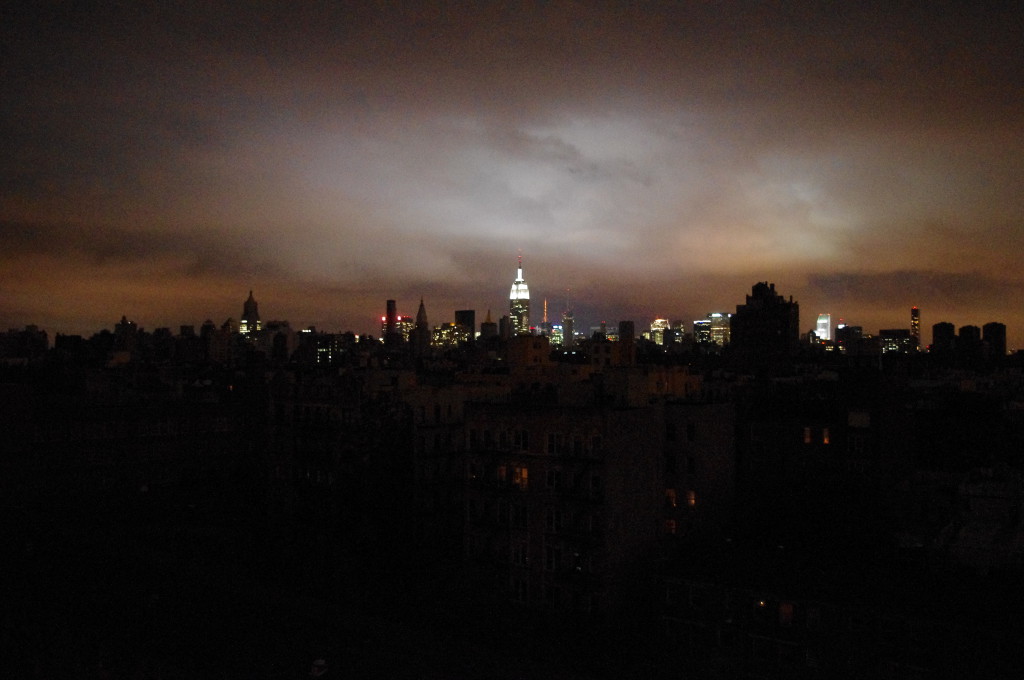 So, coming back to the initial question, does it then mean that whenever I turn on/off a light bulb there is a power plant increasing/decreasing their production at the same time to keep the grid balanced? The answer is: it could be possible, but it is extremely unlikely. In detail, to balance the supply and demand of electricity, the electricity trade comprises several markets, each one of them playing a different role in the system balance. First, your bulb electricity consumption (even your house consumption) is mainly planned and bought in advance via a non-real time market; furthermore, even when the consumption of an individual is not as planned, the market does not react to individual imbalances. By contrast, all the individual imbalances are continuously aggregated, and then, if corrective measures are required, this sum is corrected by purchasing/selling extra electricity via ancillary services.

Therefore, in the case where the grid is in the threshold of requiring corrective measures, and at that precise moment you turn on/off your light bulb, your action would be then responsible for the change in production that corrects the grid imbalance. However, considering the tiny consumption of a light bulb and the continuous variations on the electric grid, it is far more likely that your consumption changes remain unnoticed for the system balance mechanism.

Wait a second! Imbalances? Planning? Real time? I do not do any of these. I pay my bill at the end of the month at a fixed price per unit of energy (most likely €/Kwh). Well, while you do most likely pay at a fixed rate to a retail electricity company, this company has to plan in advance the consumption of its customers, buy energy at the market price, and account for the imbalances that result from the activity of its customers.

So, am I paying an overprice because of the retail company acts as an intermediary? Can I not buy directly the electricity myself? The answer is no, you can and should not; aggregating  small customers (end-consumers and small companies) under the same umbrella has, even for the customers themselves, several advantages:

As a result, electricity trade requires two different markets. A wholesale market where big volumes of energy are traded at variable prices and a retail market where small consumers buy, in general, energy at a fixed price. While the retail market does play some role on the grid balance, it is the wholesale market that’s the main responsible for ensuring that the system does not fail.

Players of the wholesale market

Based on the above description, a natural question that arises is, who are then the market players involved in the electricity trade? While the list is rather extensive and complex, I will try to do my best to summarize the main players (keep in mind however that this is not a detailed description):

While the list above describes the agents of the market, the electrical grid has to be built and maintained so that the energy is not only traded but transported between producers and consumers. To ensure that, the electricity grid is divided between high voltage (for transmission across long distances, e.g. between cities) and low voltage (electricity transmission for short distance, e.g. within a city) and two key entities are used to guarantee the grid support: 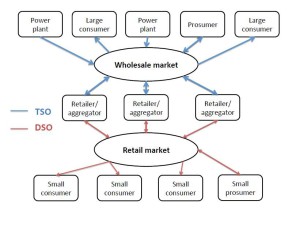 Simplified schematic of the energy market

We have stated that the wholesale market is a key mechanism to keep the grid balanced; moreover, we have described the key players of the market. Now, the only question left is: how do these players interact so that the market is balanced?

They key idea is to have a market where agents have enough room for error correction so that balance can be ensured; in particular, the main principle is to provide a mechanism where consumers/producers can plan and trade, and continuously correct when they realize that their planning was wrong. To accomplish that, electricity is traded in several different markets where the main difference among markets is how far in advance the energy is sold/bought. A scheme of the market is provided below:

Future markets represent the first step in electricity trade. Contracts are signed months or years in advance between two parties for delivering a certain amount of electricity at a certain price; the duration of the contract usually lasts months or years. They are the safer options for buying electricity when it comes to price, but also the most risky when planning electricity consumption/production as the associated uncertainty is higher.

In particular, the market divides a 24h day in a set of N time intervals; then, participants have to submit their N bids for day d before some time deadline on day d-1. A typical example of individual bids is depicted below:

Typical supply and demand bids on a time interval [1] 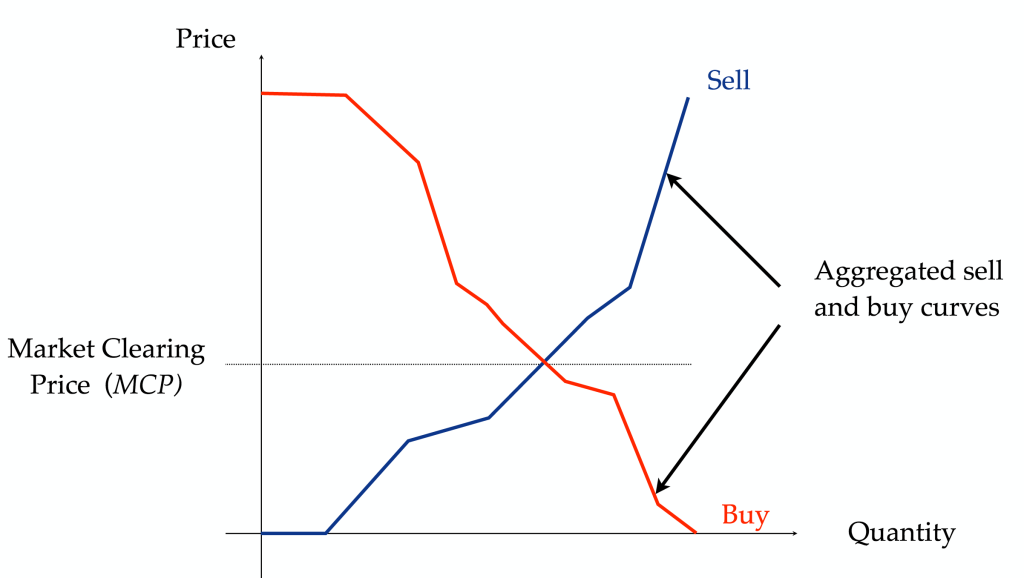 Establishing market clearing price by aggregation of supply and demand [1]

As even one day in advance energy consumption can not be perfectly planned, the intraday market offers another opportunity for market agents to correct their past market transactions until right before the energy delivery takes place.

The format of the market is not homogeneous, but instead, it has several formats depending on the region/area of the world. In some cases, the intraday market has the same structure as the day-ahead market: several trading sessions are established and at the end of each session the market clearing price is determined. An example of such a market is the electricity intraday market of the Iberian Peninsula [2].

In some other cases, the intraday market is a pool where producers and consumers submit their bids, and where a bid defines an amount of energy and the time interval when the energy can be traded. Then, when an supply and a demand bid match, the transaction is approved and the producers and consumers are liable to produce/consume the contracted energy. An example of this type of market is the Belgian intraday market [3].

Considered to be a market for some agents and a balance mechanism for others, the imbalance market/mechanism is used for keeping the grid balance in real time. In particular, the market operator monitors the grid frequency and the imbalance position of the different market agents; then, when the frequency deviates from a certain threshold or the planned production/consumption of the market agents changes, the market operator buys ancillary services to bring back the grid to equilibrium. Finally, the cost of executing these ancillary services is shared among the different agents who caused the imbalances (the agents that consume/produce a different amount than the one they agreed on in past markets).

While agents can not directly buy/sell energy via this mechanism, they can modify their expected production/consumption and pay the respective price according to the ancillary services executed. As a result, if a good forecast of the imbalance price is obtained, some companies might decide to buy/sell energy via this method during the periods where they think that the imbalance price is more favorable than the price in the past markets.

Any of the described agents can participate in this market by selling options for generation and absorption of grid power; however, as within this market itself there are several different categories and each one of them has certain requirements, e.g. type of technology used, participation in this market is usually more restricted.

We have seen that balancing the electric grid comes at the expense of continuously planning and correcting the plan. When renewable energies where not part of the market, this was an easier task as energy production was quite deterministic and adaptable; in particular, nuclear, coal and gas plants could produce as much energy as they wanted independently of any external conditions. The end result was a system where prices were quite stable and where balance was a rather easy task to perform. 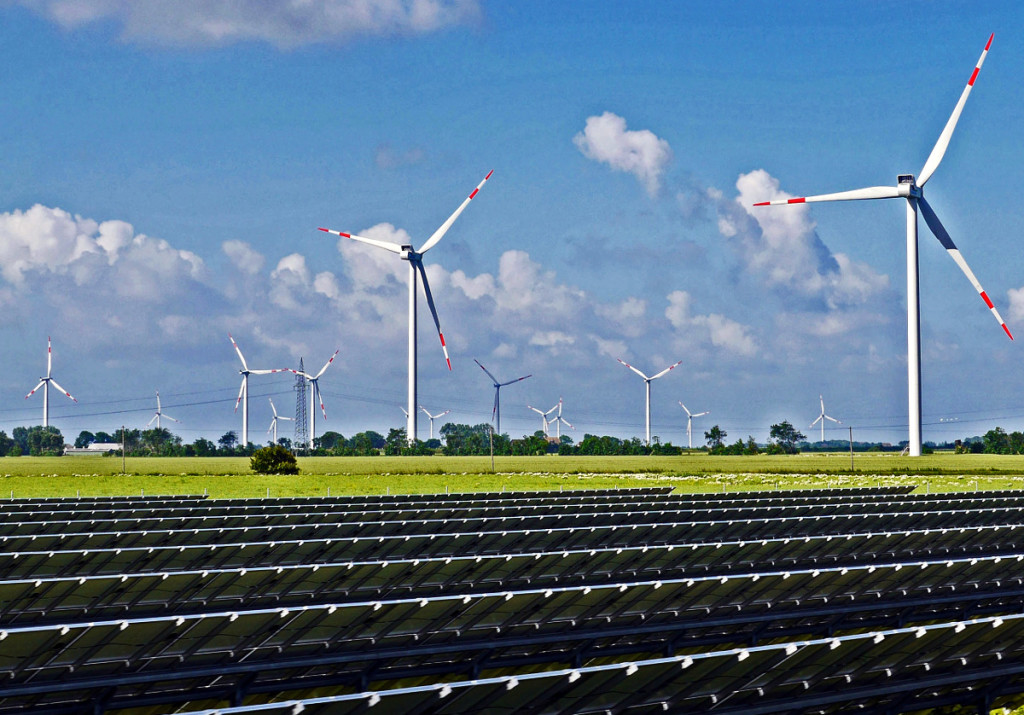 However, as renewable energy sources are the future of humankind, there are a large number of researchers around the globe tackling the different issues associated with the increase of renewable energy production. One of the many issues deals with controlling and attenuating the variations in market prices due to the uncertainty of renewable sources. In more detail, by forecasting electricity prices we can anticipate big variations and imbalances and take measures to correct them. The latter is the main focus of my current research and the topic of the PhD I’m doing at EnergyVille. To avoid excessive details in this introductory post, I would conclude here. However, if you are interested in the topic, check my future blog posts where I will cover these things in more details.