Why complexity is rising?

With the integration of renewable energies, storage units including EVs, active demand and other advanced components (i.e. smart meters, smart transformers etc), into power grids, as well as all the “intelligent” functions needed for their management, the complexity of the electrical system is rising [6].

Smart electrical systems are complex because they are made of heterogeneous components. This includes renewable energy sources and active loads such as electric vehicles or smart buildings. In addition, the highly distributed sources and loads should work within a competitive energy market.

A second factor of complexity is due to the multilayered architecture of the electrical system. This multilayer structure is well described by the Smart Grid Architecture Model. This is a reference model to analyze the Smart Grid use cases in a technology-neutral manner. It is now a widely accepted model to describe smart grids functions. The 5 domains (generation, transmission, distribution, distributed energy resources and customers’ premises) cover the complete electrical energy conversion and transportation chain. The zones represent the hierarchical levels of the power system management. The interoperability layers give a simple presentation of the architecture of the smart grid and the different points of view that can be adopted to visualize it. The business layer describes the regulatory, economic and business structures and objectives that underlie the smart grid operation. The function layer describes the functions and services that are required to satisfy the business and Smart Grids operation needs. The information layer describes the mechanism and protocols that are used for the exchanges between functions. The physical implementation is represented by the elements given in the component layer. This includes power system equipment, protection and control devices, network infrastructure and computation centers.

It shall be noted that smart grids are even more complex if we add the geographical territory or the weather system layers that influence the operation of the components at the different domains. And the component layer itself can be decomposed into a multilevel arrangement going from the high voltage transmission level to the low voltage distribution network. 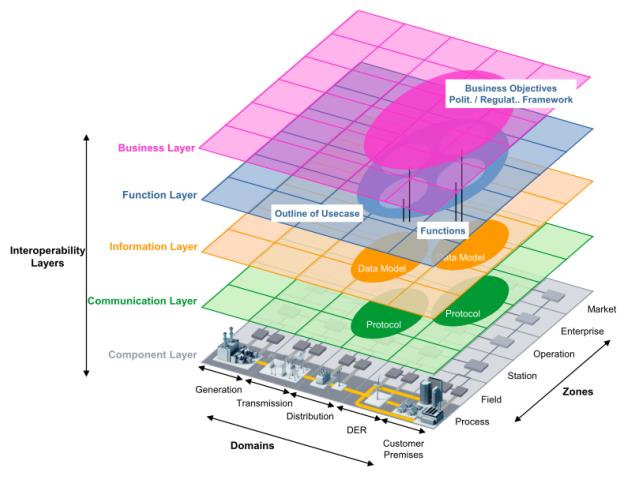 A third factor of complexity arises from the hierarchical organization of power systems, meaning the co-existence of high-connected central nodes and low-connected periphery nodes. The energy delivered by the power sources are transmitted by few transmission links to substations and then distributed to the customers. Even if smart electrical systems are closely associated to the decentralization of power sources and yield by the homogenization of the nodes’ status, the hierarchical organization of the power management system may remain partly necessary in order to guarantee the satisfaction of the business and customers’ needs.

Of course, there are many dynamic interactions between elements of the components layer and between actors of the business layer. Some of these interactions are difficult to predict (for instance, power produced by renewable energy sources or actions taken by the business actors) and local dynamic unwanted variations may impact the electrical system on a very large scale. Dynamic actions are required to prevent any major outages of the electrical system. This is the main reason for the development of new control schemes.

Finally, the grid operation is more and more difficult to predict due to the growth of renewable energy sources with a variable behavior largely dependent on the weather.

What are the challenges raised by the complexity?

The challenges have been listed and prioritized by the EU and US Smart Grid research agendas. Their inventory includes complex electrical system modeling and advanced system design. A third key issue is to ensure the interoperability among devices and subsystems of the future smart grids. Other challenges are related to security, decentralized coordination, monitoring, automation and ICT capabilities.

Modeling the complex electrical system is necessary to understand how smart grids properties emerge from their complex organization. This is a mandatory step toward the design of resilient and agile architectures for the optimization of operations.

The proposal of a framework for standardization of smart grids is another key challenge because smart electrical systems are not engineered from ground-up. They result from the incremental transformation of current power systems into smart electrical systems, by the connection of new subsystems or devices. To achieve interoperability of smart grids it is necessary to ensure that the added components and the transformed system will comply with the smart grids standards. The proposal of a framework for the development of these standards is therefore a crucial issue to ensure that an efficient and interoperable smart grid is achieved by the transformation process.

How to face complexity’s challenges?

Many approaches and tools have already been developed to study the complex interactions of many-body systems in condensed matter, relationships in biological systems, properties of transportation or social networks, resistance of internet to attacks, etc. Some of them have found applications into the world of electrical systems. Without being exhaustive, one can cite the following approaches to face complexity’s challenges.

Graph theory is about the study of the abstract representation used to model interactions between objects. Graphs are defined as a set of nodes connected by links. Graph theory investigates topological and spectral properties, graph flows. It has been widely used to classify topologies of power systems, to understand their multi-layer organization, to identify vulnerable elements [1].

Percolation theory is linked to graph theory. It focuses on the properties of the connected components in random graphs. An example of bond percolation is given in Figure 2. It describes how a connected cluster arises on a square lattice according to the probability of presence of a bond. Below a critical probability, only small disconnected clusters appear whereas beyond this threshold a “giant” cluster interconnects both sides of the grid. It should be noted that the structure of the giant component appears to be fractal. Percolation theory widely used to study some properties of matter has also been used for power systems, in particular to assess their vulnerability when facing a cascade of faults [3]. 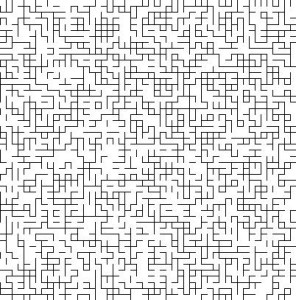 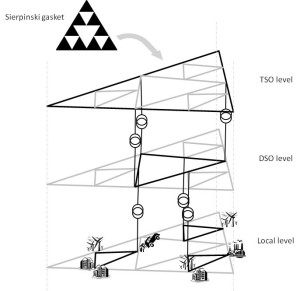 When analytical approaches are too limited to understand how complex systems behave, multi agent systems can be used. Multi agent systems are made of the assemblage of agents interacting with their environment.  One interesting feature of multi agent systems is to provide a framework to study how collective behaviors arise under given circumstances. Many applications in power engineering are found into the literature and a comprehensive review is given by [5]. Agents may be end users, generators, aggregators, network operators, etc. Multi agent systems are used for modelling, protection or control purposes.

Whatever the chosen approach is, the main purpose for researchers and engineers is to simplify as much as possible the complexity of the power system to understand how are set its main properties or how can be optimized its design to meet specifications. Beyond power and control engineering sciences, complex systems require to foster cross-disciplinary research and development works. This is the price to be paid to design and operate the future electrical system.

View all posts by: Nicolas Retière